August 19, 2011
And I’m not talking about the coffee chain.
It’s taken me years, literally, to catch up with one of the best, critically acclaimed sci-fi dramas of the last few years: the Battlestar Galactica (BSG) TV series that ran from 2004 to 2009. Great stuff. But watching it this way got me into thinking about the way we enjoy our personal entertainment and how its social impact has changed over the years.

A long time ago, say, from the ‘50’s through the ‘70’s, there was a limited number of TV channels. So-called movie “events” were scarce (three or four really big ones a year, at the most). Your individuality was defined by the kind of books and magazines you read, and probably the theater plays you saw and night clubs you attended. But mass media was a social thing. Almost EVERYONE knew what had happened on the highest rated drama the night before, had heard the same local news, or had seen the same sporting event. A really big theatrical release guaranteed almost everyone had seen it and discussed it. You could tell what the cool property was by looking at the cover of Mad Magazine. 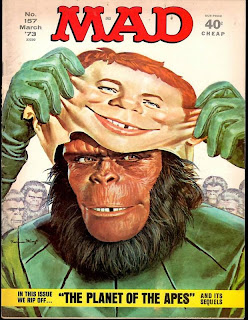 Nowadays, there’s an endless variety of open TV, cable and digital channels for every taste. And you can rent or buy whatever series you want to watch when you feel like it.
Case in point: I bought the BSG series but, as a person with limited free time to watch TV, I end up catching up on series long after they’ve broadcasted. So I’ve been trying to get up to speed on Entourage, Smallville, 24, Mad Men, Breaking Bad… even the The Batman animated series. But by the time I get to some of these, nobody cares about them anymore. BSG got very limited exposure in Mexico, only the first season was available to buy or rent, and scifi in general is not popular down here. So I’m one of the few within my circle of acquaintances that is excited about it. A couple of nights ago I was watching in bed and got to the show almost at the end of the third season where Lt Kara “Starbuck” Thrace apparently kills herself, disintegrating her viper against an energy cloud. Powerful stuff. I’m sure she will somehow pop back from the dead for the last season, but in the meantime the shock was huge. So much so, that my gasp woke my wife up.”What happened?” she asked. “Starbuck’s dead!! I cannot frakking believe it!” (“frak”, by the way, is BSG’s euphemism for… ok, I guess it’s obvious, nerd parenthesis off). “What?” “Yeah, she killed herself in her Viper.” “What the hell is a “viper”?” “Oh, nevermind, go back to sleep”. And so, I was left with no one to share the shock and excitement, because the next morning no one knew or cared about BSG at the office, and if anyone somewhere else might have, they probably saw it when it first aired.
So, sometimes watching a TV series can become a lonely enterprise. Even so, it’s exciting that now we can catch up whenever we want to whatever everyone’s talking about. And we can choose what really excites us, and we can link with people who share similar interests based on a wider range of entertainment options. There’s something for everyone’s taste and the really great stuff still manages to stand out from the clutter.
Exciting times we are living in.