Showing posts from 2013
Show all

I finally have a little time to pick up my blog, and since we are already in October, I chose a Halloween-ish theme, only because the idea came up from a monster bobble head figure (even though it’s not really a Halloween-related monster). If you weren’t a kid in the ‘60’s or very early ‘70’s you probably have no idea of who this character is: That’s Ed “big daddy” Roth’s “Ratfink”. Ed Roth was a drag racing car aficionado and designed a lot of outlandish customs back in the '60's. He was also the cartoonist who created Ratfink, among many other similar frantic monstrous creatures (very similar to the Weird-Oh’s characters created by Bill Campbell). Anyway, that’s not really the point of today’s blog. I grew up looking at some of these monstrous creatures around the house and they always bring back memories from my childhood. Last year while on vacation with the family in San Francisco, I visited the Cartoon Art Museum where I was fortunate enough to see
Post a Comment
Read more

A lesson from the workings of a teenage girl’s mind… 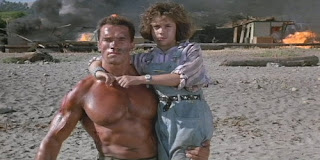 Hey, finally making a quick, much anticipated (mainly by me) comeback to my blog! And to celebrate the occasion, I’d like to reminisce about something that happened to me a long time ago, when I was a teenager: one day, a friend’s daughter (she was about 6 years younger than me) anxiously asked if I liked Alyssa Milano. She was dead serious about it. Back then I only had a slight idea of who Alyssa Milano was (the girl who played Arnold Schwarzenegger’s daughter in “Commando”, right?) and I did think she was cute, so I told her so. She immediately sighed with sincere relief, so I asked her why she was interested about it. She explained that Alyssa Milano was dating Corey Haim, and if I liked her I could date Alyssa so Corey would be free to date her. Yes, she was absolutely certain of this. That was a very enlightening moment about the workings of a young teenage girl’s mind, but more importantly, it was also a lesson about the perception that people have about
Post a Comment
Read more
More posts