And my Number 1 Movie Ever is…


Working for the movie industry, many times I’ve been asked this question by different people. It usually gets me to re-think which one to choose above all others. And every time I come back to one conclusion, which for no specific reason feels embarrassingly clichéd (especially when talking to more serious movie connoisseurs like my professional film critic friends).

But here it is. My most favorite, number one movie ever is:

The Empire Strikes Back. 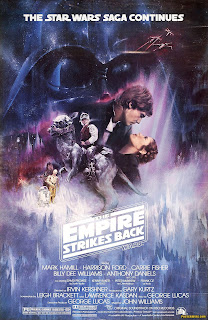 There, I’ve said it.

And the more I think about it, the more I realize there are plenty of reasons for that particular movie to have a special place in my heart.

It is not only because it came out in 1980, when I was at the impressionable age of 10, and not just because it was the follow-up to the original, commercially successful Star Wars phenomenon.

No, it actually has A LOT to offer as a movie, thinking about movies as the sheer escapist entertainment they should be.

And here are just seven of the many reasons that make this my favorite movie ever:

1.       It was exceptionally well crafted by its time. Visuals, special effects, sound effects… they were all so well done and presented, that you felt you were actually there. I loved the atmospheric feel ranging from the violent snowstorm from the opening scenes, the trip aboard the Millennium Falcon, the swamps of Dagobah, the furnace in Cloud City… the sounds, the images; they truly transported you to a galaxy far, far away. One simple scene that stands out for me is when the Falcon lands in Cloud City’s outdoors’ docking bay. The sunset, the breeze, the ship’s steam outlets… you actually feel like you’ve just landed from a long trip on a pleasant, otherworldly destination.

2.       Visuals you actually had never seen before. The battle on Hoth was amazing; the Snow Walkers’ design alone was astonishing; the weird snow steeds called Tauntauns; the asteroid field chase that by far technically surpassed the Death Star battle from the first one (and the surprise payoff when you realize the Falcon has hidden inside a giant space slug); discovering a powerful Jedi master in the form of a tiny, very old muppet (and having them pulling this off in such a way you actually thought it was believable); the climatic lightsaber duel…  This film offers one visual wonder after another, and they all feel organically part of a whole, which is not easy considering how different every scene is.

3.       The philosophical background is amazing and easy to grasp. The religious theology hinted at in Episode IV gets fully developed here, including a very good explanation about what “The Force” is, as well as some wonderful pearls of wisdom, like Yoda’s famous “Do or do not. There is no try”. It all made you actually wish you could become a real life Jedi.

4.       The drama. What is a good movie if it doesn’t have great drama? And in that sense, this movie is PACKED from start to finish: Luke Skywalker lost in a snowstorm while there’s an impending imperial attack and Han Solo risking his own life to save him; the exploding chemistry of the love-hate (but mostly love) relationship between Han and Leia (and you thinking “wait, wasn’t this Luke’s girl in the first movie?” -because you still didn’t know they were twins); Lando Calrissian’s betrayal (the scene where they find Darth Vader at the dining room was a real shocker, and you just loved Han’s no-nonsense attitude: hey, there’s the villain, just shoot him! It didn’t work, but he did the smart thing you actually wanted him to do); C-3PO gets blown to pieces; Han Solo gets frozen in carbonite; our hero gets his hand cut off and actually loses the final battle; and of course, the shocker of all shockers: Darth’s revelation to Luke: “I am your Father”. How cooler could this get?

5.       The dialogue. This film has a particularly great script with many wonderful, memorable lines. Just check out the quotes' page in IMDB and you’ll see what I mean.

6.       The great ending. Such a convoluted plot could not be easily resolved. And we would probably have hated and felt cheated if they had tried to do so.  There are a lot of loose ends in the end (one of the main characters is frozen in carbonite, for chrissakes!) but they manage to leave you with a sense of resolution AND still obviously wanting MORE!! 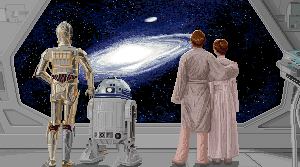 7.       The wonderful music. To me, this is John Williams’ finest overall score ever. This has some great memorable themes (including the Imperial March) and you don’t feel there are any fillers just to get some background music in there; every piece seems thought through and carefully composed for each scene. This is probably the soundtrack I’ve heard most times in my life and I still love putting it on the iPod once in a while.

I could go on and on, but I think this rests my case. Aside from being part of a very popular, commercial franchise, The Empire Strikes Back stands out as a GREAT, overall movie experience and for that it deserves its rightful place atop my favorite movies’ list;  the one movie with which I measure all other movies.

You probably have your favorite movie ever for completely different reasons.

But this is mine. So there!