October 02, 2013
I finally have a little time to pick up my blog, and since we are already in October, I chose a Halloween-ish theme, only because the idea came up from a monster bobble head figure (even though it’s not really a Halloween-related monster).

If you weren’t a kid in the ‘60’s or very early ‘70’s you probably have no idea of who this character is:

That’s Ed “big daddy” Roth’s “Ratfink”. Ed Roth was a drag racing car aficionado and designed a lot of outlandish customs back in the '60's. He was also the cartoonist who created Ratfink, among many other similar frantic monstrous creatures (very similar to the Weird-Oh’s characters created by Bill Campbell). Anyway, that’s not really the point of today’s blog.

I grew up looking at some of these monstrous creatures around the house and they always bring back memories from my childhood. Last year while on vacation with the family in San Francisco, I visited the Cartoon Art Museum where I was fortunate enough to see some Mad Magazine and Marvel Comics’ originals, which was absolutely exciting (my wife and kids were ho-humming the time away, but at least they got a kick out of some of the most outrageous Mad cartoons, plus there was a small Paranorman exhibition featuring some of the original stop motion figures, so they had a good time too).

As we were coming out I stopped by the gift shop and bumped into this: 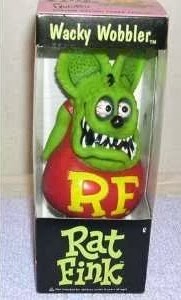 Yup, a Ratfink Wacky Wobbler figure. I really wanted to get it as a memento, but there was a group of people chatting away with the cashier and I decided I didn't want the family to wait any longer for me, so I left.

Months later I found the figure on Amazon and ordered it by mail. A few weeks later I received it at my hotel during one of our company’s L.A. Summits.

The point is (yep, it took me 8 paragraphs to get to it) that even when it’s great and all, it kinda lost its original appeal. And that's because I didn't get it at the right place at the right time: back in San Francisco, during one of the best trips we've ever had.

As I've grown older, I've lost interest in accumulating dust catchers and collectibles, but sometimes there’s this really cool souvenir you should get, not only for what it is, but because of what it represents at the moment you get it. If I had gotten that figure in San Francisco, it would have been a reminder of a great afternoon I spent with the wife and kids that also connected my early teen's fascination with comicbooks and my fun monstrous childhood memories. As it is, it’s just another cool looking plastic figure I got through the mail and out of a big brown cardboard box.

The advice here is: if you are going through a particularly memorable moment in your life and you find something that connects you to that moment, by all means try to get it (very different than trying to find something as a souvenir just because you want one; if it feels forced, it probably is). You will probably not regret it later. Not exactly rocket science, right? You probably could have gotten the same advice from your grandma while cleaning up the closet with her, but I had to get it out.